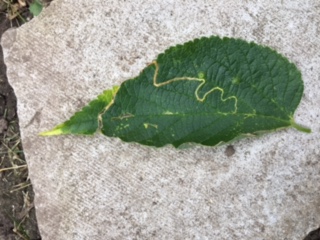 This leaf shows the fungus growing in the tree. Pruning it back might help. Or maybe the whole thing has to be uprooted & thrown away.

In the dream, I was working in a greenhouse. I found a shrub-like plant with a fungus which was killing the plant. I tried cutting the infected leaves back, then the branches, but eventually there was just a few small stems coming from the soil and I was thinking it needed to be isolated from others. If it didn’t improve after this quarantine then I would toss it in the compost pile. When I was putting it aside a person in a car drove up and asked me what I was doing. I explained and they agreed it was the right thing to do and then we returned to the work station. The energy of this person was malignant. They were nice on the outside but something was odd about them. It seemed that they didn’t want me over in that other area, as though there were something there which they didn’t want me to find.

A plant in a dream is about growth. The invisible fungus is something which destroys the growth of a plant in an unseen way. In real life, the things which affect growth are negative comments, criticism & back-biting. They can zap the life out of a project or initiative without ever being seen.

In this dream, I realized there was no hope for the plant. The disease had taken over completely and it was time to let it go. Interestingly, when I threw out the plant then a person showed up who also appeared to be diseased and malignant. In other words, they had the willful intention to do harm.

The solution to a dream like this and when dealing with a person in real life who is like a diseased plant is to trust yourself when it is time to let go of a project or when its time to let go of a job or a relationship. People who have allowed their egos to completely over-take them so-much-so that they are okay with willfully hurting another human being are not good to be around. Detach and stay Empowered. Whatever issues may arise after the change, it is better than staying in a diseased environment and letting yourself get exposed to those toxic ways.